The population study that forms the basis of the Sarasota County Commission’s redistricting plan has some big inaccuracies at the neighborhood level, something the expert behind the study warned of and a flaw that could negate the whole purpose for redrawing the commission district boundaries by making it hard to know if the new districts have an equal number of people.

“To be honest — good, fast and cheap,” Doty said, describing the estimate approach. “We had very little time. We had basically a week to do this work and not enough money or time to do significant quality control.”

Doty said he has no way of calculating the margin of error, but added that “at the block level it’s going to be high.” 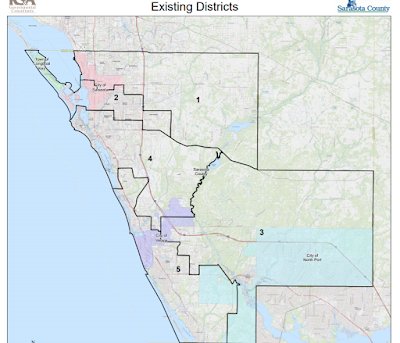 Below: An analysis of the specific options presented by the Consultant: Existing districts and three alternative options:

The analysis below has been vetted on the 3 different Alternative maps proposed for redistricting:

The BOCC’s stated justification for redistricting has been the need to rebalance population across the three districts. This essentially required the private consultant (Spitzer) to increase the populations of D1, D2, and D4 by 3,000 to 4,000 people while reducing D3 and D5 by 5,000 to 6,000. Given the stated desire of preserving the core of existing district boundaries these population transfers do not require major restructuring. Just some modest tweaks.

As of September 18, partisan composition of the districts was as follows:

The partisan composition does not translate perfectly into partisan performance (election outcomes). Turnout can vary across partisan registrations along with crossover voting. And NPA voters (which are significant and growing) do not break evenly across Ds and Rs with year to year registration. Rs typically have a higher turnout percentage while Ds tend to get a higher share of the NPA vote. Crossover voting is difficult to determine but it appears to be less apparent with each cycle. All of these factors considered, Ds tend to overperform the partisan composition of most Sarasota county precincts but there is spacial and temporal variation (it varies over place and time).

Past election outcomes demonstrate the above observations. In 2016, Atkins got 488 more votes than Moran in D1. He got 4637 fewer votes than Moran in D2. Most Ds running in 2016 won by modest amounts in D1 and lost by 3000 to 5000 votes in D2. This tracks reasonably close to partisan composition. 2018 was a better year for Democrats in Sarasota County. Beggs “won” D1 by 3095 votes and only lost D2 by 14 votes. She did a little better than Nikki Fried in D1 (who won by 2819 votes) but a little worse in D2 (Fried won by 673 votes). Fried was the best performing D in Sarasota in 2018 btw. Conversely, Jouniari only won D1 by 880 votes and lost D2 by 1183 votes. So, under the current boundaries, a D can win D1 by a few thousand votes in a really good year. In a bad year they might lose by a few hundred to a thousand. In a good to great year a D might be able to eke out a win in D2. In a bad year they can lose by 5000 or more votes.

So how do the three maps change things?

All precinct maps may be found here