With slow and no response to public records requests and with minimal public notice, Sarasota County will unveil its proposed new District-level maps next week. All this stems from the Board's decision in April to explore reconsideration of the boundaries of the five county districts, in light of the new Single Member Voting.

Why this matters: Cathy Antunes

Show your opposition to this “plan”. An Open to the Public session will
precede the Redistricting discussion. See you on Wednesday!

<<<<BREAKING NEWS: Here are the maps Spitzer will present Wednesday:>>>> 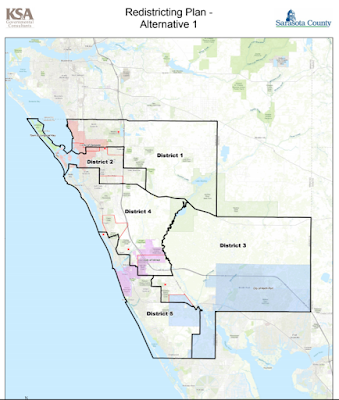 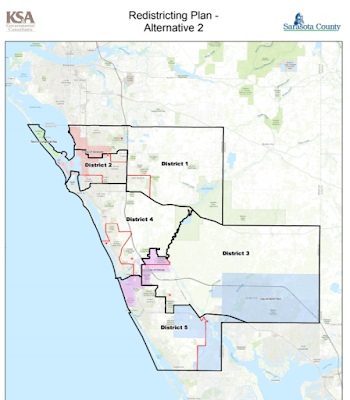 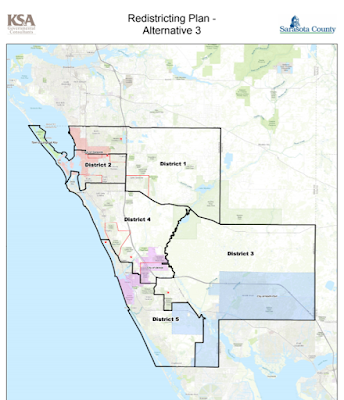 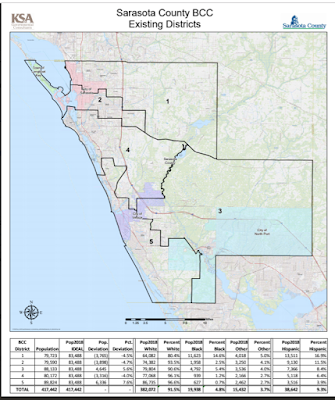 Note: Above maps courtesy of Rachel Hackney of the Sarasota News Leader


Board of County Commissioners Agenda: Page 1
1. OPEN TO THE PUBLIC – (Three-minute time limit per person.)

How open is it?  From The Sarasota News Leader:


Additionally, county Media Relations Officer Drew Winchester
confirmed with staff that, as of late afternoon on Sept. 4, three of the
commissioners — Charles Hines, Nancy Detert and Christian Ziegler —
have scheduled one-on-one telephone conversations with the consultant
who is handling the redistricting initiative for the county,
Kurt Spitzer of Tallahassee. The Sarasota News Leader

Will this telephone conversations be recorded? Will it be known how long
they lasted, what was discussed?

While the consultant and commissioners huddle over the phone preparing their own maps, the information needed by and promised to the public is being withheld.

Is it ignorance or incompetence?

It isn't ignorance. The commissioners were told during the final open to the public comments on August 27 that the deliverables from Spitzer and Associates (block-level GIS data) were not publicly available.

It might be incompetence.
County staff says, "The [block level] data was in an Aug. 2 memorandum from Spitzer to the County Commission."
The memo, however, does not contain the county-wide block needed by the public to produce their own redistricting maps. Instead, it provides info for "key growth blocks by district."
Despite repeated public records requests from several citizens, as of September 5, the County and Spitzer had provided block-level population data for only:
Finally on Sept. 6, a public records request for block data from The Sarasota News Leader was responded to. According to the county,  the entire block data spreadsheet is now here.

By the deadline [contract deadline July 31] , just one of the deliverables below -- Part (c) -- was delivered -- two days late, on August 2.

Part (b) was provided to the public late on September 6
Spitzer & Associates has not fulfilled their Task 1 contractual obligations, and the county has been laggard in providing the data necessary for the public to prepare alternate maps. (see below)
If it's not incompetence, they know exactly what they're doing -- withholding information to prevent an informed public response to the maps being presented on September 11.

By the deadline, just one of the deliverables below -- (c) -- was provided:

(a.) GIS - The 2010 and 2018 population estimates in file geodatabase or shapefile format at the 2010 Census Block level of geography.

(b.) Spreadsheet - Block-level results will be summarized by commission district and exported to Excel format.

(c.) Report – A narrative report describing the methodology used to update the 2010 Census data. THIS WAS PROVIDED

(d.) Map - A “heat map” in PDF format showing 2010-2018 growth by block. It will be shaded semi-transparent with imagery as a base. Commission district boundaries will be shown. A table summarizing the population estimates by BCC District will be included on the map showing the following 2018 information: