Re:  Critical Area Plan for the Palmer Blvd./Quads Area

I appreciate your compiling the diverse attributes of my neighborhood and laying out some interpretations in the Critical Area Plan draft.  This is indeed a grand undertaking, and I’m sure you’ve put in many hours!

I see: Adopted in 1985, the CAP was privately initiated and required to meet the provisions of the Comprehensive Plan to map the designated industrial area.

I would be curious to know who initiated this CAP, and if these “players” are still around today.  Even back then, you would think any plan would be publicly initiated.

The draft outlines the zoning districts listed below. I believe Figure 5 should have widened the territory to include a much larger view, and the acreages should be given for residential in the wider area.

The following zoning districts (Figure 5) and acreages exist within the CAP:

Some of the recommended permitted uses should be prohibited, such as the following: Implementing Zoning Districts

N.W. and S.W. Quads
Industrial / Office - Suitable
An additional zoning district should be added to the UDC: Parks and Recreation.  I think that this should be recommended rather than the blanket MEC.

Just as the City of Sarasota is looking at amending zoning to create this set-apart district, Sarasota County should have such a zoning district.

I do not see any solicitation of opinions from public/private/charter schools regarding student transportation needs.  Would you please reach out to some entities for input? 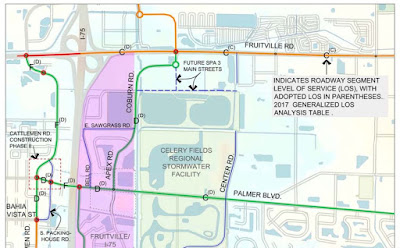 Traffic studies – current and anticipatory – are notoriously flawed.  It’s impossible to believe studies will approach reality.  They haven’t in the past, and that will be the future story.


Mitigating Improvements Section 3, Mobility, of this study indicated that the improvements associated with the Cattlemen Road Construction Phase II project and the construction of a roundabout or signalization of the Apex Road and Palmer Boulevard intersection will improve the roadway level of service (LOS) in the area. However, the LOS for that section of Palmer Boulevard west of Apex Road will likely continue to be below the adopted LOS. Also, identified as a mitigating improvement is the expansion to 4 lanes of Palmer Boulevard from Porter Road to Apex Road. However, that expansion would conflict with the objective of preserving the existing character of Palmer Boulevard with its open corridor and roadway section also identified in this study. With the development of any of the Quads parcels, Transportation Planning will identify certain improvements such as turn lanes that will be required to accommodate the traffic generated by a proposed use.

There really is no use that won’t increase traffic and ruin the larger neighborhood character.   Keep in mind that identified capital project needs require funding of $1.2 billion.  Where will money come from for creative roadway improvements that will serve the community in a respectful way?