FACE OF $70 MILLION BENDERSON ROWING FACILITY IS "INTOXICATED, ABUSIVE, OUT OF CONTROL"---PAUL BLACKKETTER

With more than 42,000 rowers, coaches and support staff from across the globe planning on traveling to Southwest Florida for the 2017 World Rowing Championships at Nathan Benderson Park, THE SARASOTA PHOENIX has come into possession of a video which clearly shows Randy Benderson's "point man" for the event, a wild, out of control, abusive and intoxicated Paul Blackketter, verbally abusing and physically threatening a fellow employee of the Benderson rowing facility.

The video clearly depicts a completely out of control, enraged Blackketter, no doubt verbally abusing a fellow employee with the most foul, disgusting and repulsive language.

[GO TO THIS YOUTUBE LINK TO VIEW BACKKETTER VIDEO]


Blackketter is the six figure ($175,000) Executive Director of the Randy Benderson controlled entity called Suncoast Aquatic Nature Center Associates (SANCA), which under Blackketter's direction manages the Nathan Benderson rowing facility. Blackketter, as mentioned above is also Benderson's point man indirecting the operations for the 2017 international rowing event and all other events at the facility.

Link goes to an earlier version of this story, which is still developing. . .

Blacketter
Posted by Sarasota Vision 2050 at 4:06 PM No comments: Links to this post

Housing vs Tourism: A new view in Barcelona 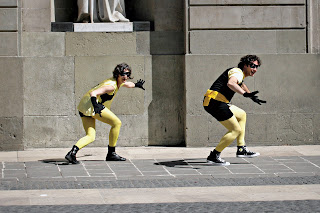 In 2007, Ada Colau put on a black leotard, a yellow cape, and a Zorro mask and gate-crashed a campaign rally in Barcelona. For two and a half minutes, Colau commandeered cameras, holding up a cardboard sign—“Housing Out of the Market, Like Education and Health”—while she delivered a speech on irresponsible development. “We don’t want to hear that the solution is to build more,” Colau told the crowd gathered in the small city square. “We have devastated our territory more than enough. There are a lot of houses. What we need is that these houses fulfill their social role.” When she was done, she dashed between a pair of parked cars and sprinted down the street.

She didn’t know it then, but her appearance as a superhero was one of the first steps on a path to city hall. In June she was elected mayor of Barcelona, with the support of a coalition of leftist political parties. She campaigned on fighting inequality

Colau sees parallels between housing and tourism; she worries the latter’s growth is hurting citizens and has declared a one-year ban on new hotel licenses. She has angered the Spanish government by removing a bust of former King Juan Carlos from city hall’s main chamber; announced her intention to rein in Airbnb; and taken aim at banks, threatening to fine those that keep their properties empty, rather than rent them out at subsidized rates.“As mayor, I can talk to the banks on a more equal footing than I could when I was just a citizen,” she says.

“There’s a wide consensus to say, ‘Guys, we need these houses, not to speculate but for the families that need them. First we will offer you the opportunity to collaborate and lend us these houses that you’re not using and that aren’t going onto the market. We’ll improve them and put them to use. And if you don’t want to collaborate, we’ll try other instruments to give you an incentive.’ ”

Posted by Lake Sarasota Community Group at 5:28 PM No comments: Links to this post

Science Doesn’t Matter Much to Water Management District Board


Last week, the governing board of the Southwest Florida Water Management District voted to ignore the recommended order of an administrative law judge and allow local developer Pat Neal to destroy high-quality wetlands in order to build four McMansions on Perico Island.

When it comes to understanding how our local environmental resources are squandered, the story of this development is instructive. It shows a flawed process in which those who decide the fate of some of our most precious resources are often the same ones who have demonstrated the least respect and appreciation for it.

SWFMD originally voted to issue the required permit. The challengers, which included TBT publisher Joe McClash, asked that an administrative law judge review the application and issue a recommended order. After three days of presenting evidence, expert witness testimony and scientific explanations as to why the proposed development would be devastating to the local ecology, that administrative law judge’s findings of fact led him to issue a recommended order that the water management district deny the request for the permit.

In the somewhat backward process of such matters, that order than was given back to the same board who was already poised to pass it. At the meeting, Neal’s team was able to present all of their supporting arguments for ignoring the ALJ’s ruling, while McClash and his partners, which included Sierra Club, F.I.S.H. and Manasota88, then had just 20 minutes to convince the governing board to follow the ALJ’s recommended order.

Read more. . .
Posted by Lake Sarasota Community Group at 1:41 PM No comments: Links to this post

A key distinction in Sunshine

Sarasota Herald-Tribune
Letter to the editor

I read with interest the guest column last week by Sarasota City Commissioner Susan Chapman. After serving in the Legislature for 12 years I came to the conclusion that one of the greatest things we ever did was pass a strong Sunshine Law. However, I hate to see it twisted by the courts in such a way as to prevent elected officials from listening to the citizens for fear of being sued.

Our elected officials should in fact be encouraged to meet with and listen to their constituents. Are the citizens who have pleaded for attention or help required to have multiple community meetings so they can tell their story? I don’t know about you but I admire those elected officials who take time to listen.

I would hope that our courts would wake up and realize that when elected officials are meeting with the public to listen, either by themselves or for that matter multiple other commissioners, they are providing public service, and that is their job.