State and local planning - or, not

Perhaps someone can unravel this knotty puzzle:

The prevailing ideological drift in Florida for the past 20-odd years has been to dismantle top-down planning regulations that were put in place in the 1980s. The folks who created those rules foresaw that without them, Florida would sprawl into one big Broward County.

As former Commissioner Jon Thaxton made clear in a presentation to CONA recently, the reduction of the role of state and regional planners essentially left planning to local government. This is in line with standard Conservative thinking that locals know best what is good for them -- they'll foresee and provide the best solutions to avoid overpopulation, sprawling development, overburdened roads, failed services, stranded assets like parks no one uses, or worse -- a completely incoherent maze of random development, with no public sense of place.

So is local Sarasota government doing this? East County is about to become a series of rather large gated housing tracts. The appetite to privately develop land is at its peak -- just four housing projects (many more are coming) will produce more than 27,600 homes stretching from University Parkway down to 681 near Venice. This would seem a moment for local government to step up, study the big picture, and make due provisions. Have they done so?

The other part of the puzzle is this: despite the State's dismantling of any oversight of large-scale development, it seems comfortable making decisions that will affect millions of residents -- without consulting local authorities. For example: FDOT was in town last week to offer a public presentation of its plan for an $86 million Diverging Diamond at Fruitville Road. This diamond is just part of FDOT's vision of a series of Diverging Diamonds extending from Tampa down an expanded 12-lane I-75 all the way to Naples. 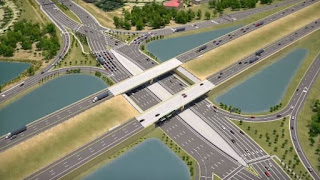 At the agency's presentation the other day, several local heads of HOA's as well as representatives of the locally planned Fruitville Initiative said this ambitious project is unnecessary; that in fact it will destroy the primary basis of the Initiative -- a grid of walkable streets that connect people to businesses, residences, and recreational spaces. While media were there, if Sarasota officials or their representatives came to this meeting at Selby Library, we failed to notice them. FDOT said it had no knowledge of the Fruitville Initiative - although its former district head certainly did, four years ago.

In sum: Vast housing tracts and FDOT gigantism could change the face of Sarasota County. One is driven by the developers' economic cycle racing in high gear before it hits another downturn. The other is a massive deployment of state power. It's unclear whether FDOT sees any responsibility to work with the best laid plans of local communities.

So here's the puzzle: If the State has demolished state control to have regulation to occur at the local level, how does that jive with the grandiose plans of FDOT? And in Sarasota, bereft of regional or state oversight, where are the representatives of our local communities when we need them?