LTE to the Herald Tribune from Dennis Robertson:

Reading H-T's front-page article of Monday, October 14, 2019, one would be left with the impression that James Gabbert's TST Ventures plan for a giant debris demolition facility had been "successfully fended off" and the insanity of a waste dump being built right at the edge of an established nature preserve had been stopped.

Nothing could be further from the truth.

Butting-up right next to the Celery Fields quads in question in that article, construction of a Waste Transfer Facility is well underway.

In August 2017, multiple ad-hoc groups and hundreds of protesters did beat back Gabbert's proposed giant 16-acre debris demolition plant in the quads. In voting to oppose Gabbert's plan, Commissioner Nancy Detert observed that the time had passed for industry in the area. Everyone thought that was the end of it.

In 2015 county commissioners, urged on by warehouse landlord Bob Waechter, had approved Gabbert's plan for a "Waste Transfer Facility" (WTF) on 4.3 acres he owned next to I-75 and adjacent to our public lands.


After being beat down with common sense in 2017, TST Ventures reverted to that 2015 approval.

Anyone who bothers to consult the EPA's manual on siting transfer facilities knows that such sites must accommodate giant trucks.

Where are the current traffic studies?

A facility like this should be 200' from any waterway, Gabbert's is only 50 feet away from drainage that ends up in Sarasota Bay.

Truth to power be damned, who in the county and state signed off on any of this? And why?

The thousands who protested can now bring their toxic construction debris and pesticide-laden yard waste to his facility near an established preserve and Audubon Nature Center.

To add insult to injury, on Wednesday, Nov. 6 the County Commission, stewards of this nature preserve, will consider a plan to rezone and sell our public lands for yet more industry on parcels closer to the Celery Fields.

The public needs to be there. 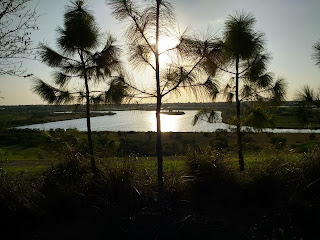