A Planning Commission Public Hearing on the proposal to build a 15-acre construction/demolition waste processing plant at the SW corner of Apex Rd. and East Palmer Blvd., right by the Celery Fields, and just south of the Fruitville Initiative, is set for 5 pm Thursday, June 1, at the County Administration Building, first floor Commission Meeting Room, 1616 Ringling Blvd.

The land is Public Land, and has never been zoned or used for heavy industry. That hasn't stopped Bo Medred from claiming that his proposal is consistent with historic industrial use in the area. This is pure fiction. Fake news. Fake planning. Fake Commission?

A letter regarding the upcoming hearing is below. It refers to this hearing, Oct. 20, at which Mr. Medred claimed that unenclosed waste processing is now so clean and tidy you can have it right in your own back yard.

Bo Medred got his wish -- he persuaded both the Planning Commission and the elected Board who run this county to change the law to allow unenclosed waste processing plants near residences.

Re: Citizens were hoping the Gabbert Dump proposal / sale pending would have been rescinded.  I am hopeful, with the exception of Mr. Bispham, since he will need to recuse himself from voting on this subject, that you will all take the time to seriously consider the gravity of what Mr. Gabbert's proposed facility will do to our beautiful Sarasota in relation to the Celery Field and the poor people who live in that area.

We are all stakeholders in this mess, we look to you to find another suitable location for Mr. Gabbert and his plans for expanding his recycling empire.

I cut and pasted the minutes from the P.C. meeting and added it to the bottom of this email in the event none of you took the time to read the minutes I referenced from the "Bo-Code" show.

Bo Medred refers to a recycling dump in Buffalo, NY

I cannot help but think that perhaps it was Randy Benderson who showed this dump (see pic below) to Mr. Medred.  It reminded me of former County Commissioner, Christine Robinson, who was thrilled to have Mr. Benderson's trucking distribution center next to the Celery Field and had referred to trucking centers she had visited in Buffalo, NY.  Who knew Buffalo was such a mecca for industrial progress such as dumps and trucking centers?  Go figure!?  What a wonderful aspiration for Sarasota, aiming to be the next Buffalo!

Mr. Medred showed the picture as an example from Buffalo, NY. He shows the houses in the background behind the piles of dirt and claims that this co-existence of homes and industry works!  He also said that the people who live in the Celery Field area should know that they live in an industrial area.  And I quote Bo, "The MEC's primary implementing zoning district has historically been industrially based and we cannot lost the integrity of that and let it get overtaken.  It's just a balancing act."

Please look at the picture Mr. Medred has provided.  Any reasonable person can see that dusty debris from a facility like this is going to JAM UP the integrity of filtrating sediments; filtration of sediment is a very important function of the Celery Field Stormwater Facility.  A facility that the county has spent at least $30 million on.  Why would the county throw an investment that is earning its keep, more so than Benderson's slush fund water park, more so than baseball parks, more so than Tube Dube or Sandborn, shall I go on?  This is crazy.

Mr. Medred also states that by building Mr. Gabbert's dump in the Celery Field area that "it will reduce trips" for people who want to drop off construction debris.

This dump will reduce trips?

This dump will reduce trips by people who live off or near Palmer Boulevard because they won't want to get stuck in the truck traffic produced by this dump.

This dump will reduce trips by people like me who go to the Celery Field to work out or to go birding because I do not want to get stuck in the truck traffic produced by this dump.

This dump will reduce trips by people like me who shop at Detwiler's Market because I do not want to get stuck in the truck traffic produced by this dump.

This dump will reduce trips by eco-tourists who do not want to get stuck in the truck traffic produced by this dump.

OR, this dump will reduce trips for Mr. Gabbert's planned housing development in the future?  What a financial coup, perhaps, for Mr. Gabbert.  Set up a dump, he gets to unload his construction debris, tree stumps, etc., for free, use the dump for a while and then sell it at a massive profit. I wish I were as ambitious and smart as Mr. Gabbert, he picked a great biz to be in.  And we can all agree, these facilities need to exist. But not next to the Celery Field.  And not

I visited the National Glacier Park in November. I remember feeling so excited just by the old time park sign and the beauty of the area, and that was before I even got into the park.  What a visual splendor Gabbert's dump with equipment or piles of crap peeking over his concrete fence will be for all to see as they try to navigate their way home or to the Celery Field.  What a visual splendor Gabbert's Dump will be when tourists view it from Celery Mountain, never to return again because of the horrific view from that beautiful vista.  What a significant loss of repeat tourism due to the jammed up traffic, nothing like sitting behind a diesel truck in your rented convertible on vacation.

4. ZOA - (Continued) Discussions continued on the following topics/issues: - operational/machinery noise concerns at the proposed property - size/space/setbacks from residential areas - setbacks/possible elimination from residential properties - possibly adding language regarding the setbacks in the Urban Service Boundary. 9:21 p.m.Commission Action: Closed the public hearing. Closed by Ask, without objection. 9:23 p.m. Commission Action: Recommended approval to modify language in proposed ZOA No. 119 under Section 2, subsection 5.3.5.b. 2. iii, as follows (additions shown as underlined text): "Recycling of Type B, C and Recyclable D fill is not allowed, unless the parcel is (1) larger than 15 acres, excluding wetlands, watercourses, and waterbodies, (2) zoned IR or ILW, (3) within a designated Major Employment center (MEC), within the Urban Service Boundary and (4) at least 1,000 feet from any residentially zoned properties." Moved by Stultz, seconded by Cutsinger, carried by a 6-0 vote; Bispham abstained. 9:23 p.m. Commission Action: Authorized transmittal of proposed ZOA No. 119, as amended, to the Board of County Commissioners with a recommendation for approval. Moved by Stultz, seconded by Cutsinger, carried by a 6-0 vote; Bispham abstained. Note: Oath/Signature Cards Filed for Record. Note: Chair Ask passed the gavel to Vice Chair Bispham and left the dais at 9:24 p.m

Yep, it's "Bo-Code" all the way.  Please do not do this, please do not grant Gabbert his dump.  This story line really has all the trappings of a "done deal" from the first four acres.  The County needs to recognize that yes, we need facilities such as the one Mr. Gabbert is trying to develop but please don't shove ten pounds of crap into a one pound sack. The ZOA Mr. Medred shoved through in making "mini-dump acreage" available for this site is wrong, any research on your parts, as true Planning Commissioners, will demonstrate that smaller is not better for facilities like this and this sentiment is recognized across the nation as a standard.

We expect you all to adhere to Sarasota's Zoning Mission Statement: Zoning's fundamental purpose is to protect a community's health, safety and welfare.

Is Bo so fluid, so versatile, so quantum that he can serve as the agent and representative both for James Gabbert and Sarasota County at the very same hearing? 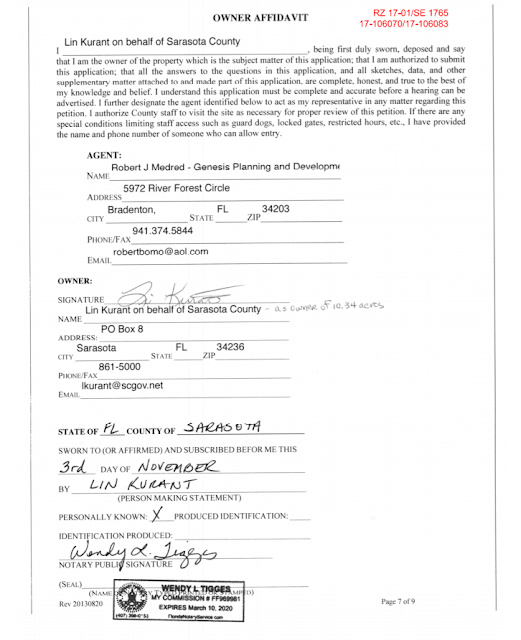