A Road to Nowhere

The Ibis Street Thoroughfare Comprehensive Plan Amendment No. 2017-F comes before the County on Wednesday, April 25 -- it will be found under item 7 on the Board agenda.

The Sarasota Board of County Commissioners will take the first step towards building a road to nowhere if it approves the Ibis Street Thoroughfare Comprehensive Plan Amendment during an April 25 public hearing.

The county transportation planning department believes that the traffic congestion south of Twin Lakes Park will be so severe in the year 2040 that we need a new thoroughfare to connect Clark Road to a full interchange at State Road 681 and I-75 via another north–south roadway.

But neither the full interchange nor the north-south roadway exist today, and neither is considered financially feasible by the Sarasota-Manatee Metropolitan Planning Organization. 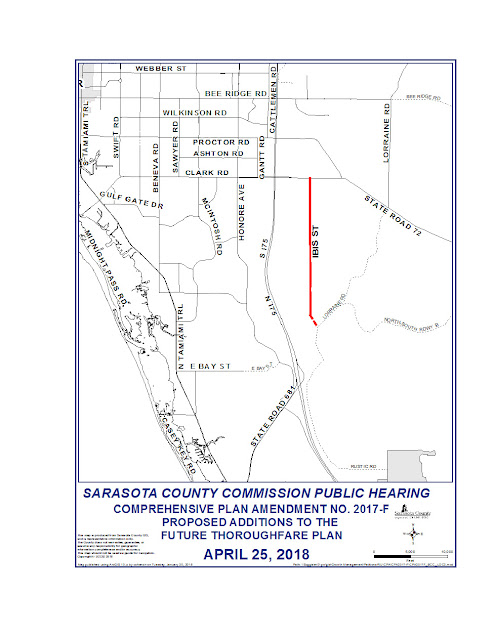 And while the north-south roadway is part of a plan to provide an alternate route from Venice to Manatee County, the project is unfunded.  The project recently suffered a setback when the commission rescinded an important funding request for the segment connecting Lorraine Road to Bee Ridge Road Extension.  That segment is a sorely needed connection needed to support development already under construction at the 5000-unit Waterside Village, the 600-unit Artistry community and the 3,500-unit LT Ranch Village.

So it is highly unlikely the proposed thoroughfare will have anything to connect to for many years or decades to come.  Instead of providing connectivity, it will be a road to nowhere.

The new thoroughfare will go somewhere.  It will dead end at Manatee County-based developer Pat Neal’s 533-acre sod farm where he wants to build 1,100-home subdivision on land zoned for only 258 homes.

Unfortunately for Neal, county regulations prohibit him from building a large development unless the property has direct access to a major road—one that is part of the county thoroughfare plan.

Normally thoroughfare plan additions are considered after the county prepares an in-depth analysis and after the public has multiple opportunities to weigh-in on the proposal.  In fact, the transportation planning department had wanted to consider several changes to our thoroughfare plan during the 2016 comprehensive plan update.  But those changes could not be processed because the county had not held the required public input sessions.

With the county’s holistic thoroughfare evaluation on hold due to a lack of department resources, Neal convinced the county to let him “adopt” Ibis Street and pursue a privately-initiated amendment.

The private process enables Neal to fast track the proposal to designate his access road as a major road.  It bypasses almost all the public engagement that must occur when the county initiates such a change.  And this case, avoiding a lengthy series of feedback sessions and workshops allows the developer to quickly overcome the prohibition on rezoning his property.

I wouldn’t object if putting a line on a map and saying a dead-end country road is a major road was the only effect of Neal’s proposal,

But it does much more.

It allows Neal to divert impact fees away from curing today’s traffic jams and use them instead to improve a dead-end country road that will be used only by his subdivision for years to come.

We believe road improvement priorities should be determined with more, not less, public input.  And we believe impact fees should be spent on real traffic problems we face today, not on ones that are imagined to occur more than 20 years in the future.

Call or email the Sarasota County Commission today and ask them to vote against the Ibis Street Thoroughfare Comprehensive Plan Amendment on April 25.

Documents relating to the Ibis Street Amendment are here.
Posted by Fresh Start Sarasota at 2:26 PM