Valerie Preziosi and her husband, Jan Svejkovsky, left their home on Big Pine Key on Friday, along with their two cats. They booked a hotel room in Orlando but then changed course for Waldo, in north-central Florida, when the hotel didn’t answer their calls. Then, as Irma wobbled, Waldo found itself at risk of flooding. Like many evacuees, they had fled from one danger zone to another. So they drove even further north to Macon, Georgia. 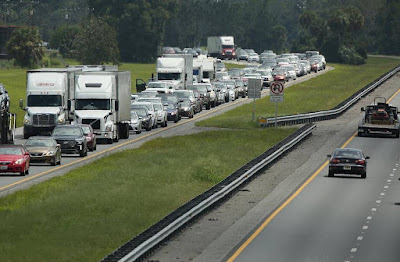 The article in the Miami Herald raises unsettling questions for Bill Zoller:

Could growth (or too much of it) be a “health, safety, and welfare” issue?

It is sometimes surprising how something like an Irma can trigger unexpected issues. The question of evacuation routes in Sarasota County is one that has bounced around for years (think: River Road), and eventually it has seemed to get a big shrug. In the event of a hurricane’s taking direct aim on Sarasota, can our government assure us that it would be possible to evacuate?  If not, what are the implications? That question must be answered…by our government officials.  Shall we ask them?

A lesson from Hurricane Irma: capitalism can’t save the planet – it can only destroy it - George Monbiot

The Suburb of the Future, Almost Here