Hands Along the Water to North Port: We can combat Red Tide

On Nov 27, 2018 at the North Port City Commission, members of Hands Along the Water, an environmental advocacy group, urged the Board to take a look at existing state research on the impact of nitrogen nutrients on Red Tide.

Despite many measures undertaken by local communities (e.g. closing septic tanks), nitrogen levels in coastal waters such as Sarasota and Lemon Bays have steadily been increasing: 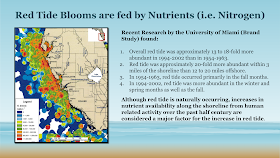 What's more, clear evidence shows that stormwater ponds as currently managed do not achieve the 80% rate of nutrient reduction presumed by state regulations. The actual performance is closer to 40%-45%.

Beginning in 2000, the Dept. of Environmental Protection spent 10 years researching the issue and, after consulting experts statewide, had prepared in 2010 to put in place an Advanced Stormwater Harvesting and Recyling Plan. Then the new Rick Scott administration came into office, and swept all these plans aside.

With Hands Along the Water was Steve Suau, a stormwater engineer who has been working on the problem and how to best address it. Suau presented the facts and potential benefits of reviving the Advanced Stormwater Treatment option.

The group asked North Port Commissioners to consider adopting a Resolution that would ask Governor Elect Ron DeSantis to restart this effort to reduce nitrogen runoff. The effort would be neither costly nor difficult - in fact it could produce revenue, the group said. Here is a summary timeline:

2019 and Beyond: Hit the Restart Button: Resolve to ask the new DeSantis administration to reinitiate the Advanced Stormwater Treatment Rule public hearing and adoption process.

Hands Along the Water speakers:

More on this significant opportunity for to do someting about Red Tide here.