Sarasota County's Charter Review Board is a elected board that serves as a conduit between citizens and the Charter, the mini-constitution of this home rule county. Its ten members serve staggered four-year terms

The Charter is the ultimate set of rules for County governance. Citizens who believe governance might be improved can go before the board to propose changes. They can also gather signatures and get a referendum without going through the board.

An example of the latter procedure occurred in 2007, when citizens used the ballot box to require a supermajority vote to approve increases in density in land use plans (e.g. a vote of 4-1 instead of 3-2 is necessary).  Arguably such measures have tamed impetuous developer activity at times, allowing for slower, more thoughtful growth.

That measure passed just as the last cycle of rapid growth was crashing. Now, with the new aggressive frenzy of development, Bob Waechter is suggesting that the Board should be restructured, in two ways:


1. The Board would be appointed rather than elected.
2. It would not meet regularly, but can be summoned into existence "on an as-needed basis," maybe every five or ten years.

The CRB currently meets three times a year to consider proposals which can come from any citizen. The review is guided by a set of bylaws and procedures.

Why would Mr. Waechter propose a change to this system? His proposal offers a few reasons -- better use of resources, and a lack of significant citizen initiatives coming before the board in recent years, among others.

One point he touched upon is more interesting: Mr. Waechter notes that an early effort to turn the Board from an elected to appointed body failed due to a concern voiced by the Republican Party that the "primarily Democrat elected officials" would "appoint only from their own party."

Now in 2016 the developer economy is revving up. Construction, roadwork, and land use changes are pursued with ever-increasing frequency, and as it happens, the County's elected Commissioners are 100% from the Republican Party. In this environment Mr. Waechter has come forward with his proposal.

This proposal would disconnect the Board from the people in two ways: we would no longer vote to elect it, and it would not be accessible to us on any regular basis.


As one citizen put it, Waechter's proposal "further discourages citizen involvement in local government." Also, let's not rule out the possibility that this is a chess move in a larger political game. The next meeting of the Charter Review Board is 6 pm, Wednesday, May 11 at the County Administration Building, 1660 Ringling Blvd. in Sarasota. Those who wish can have five minutes to speak. Wear white.


Who is Bob Waechter? 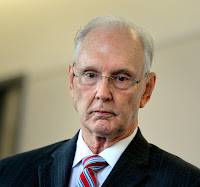 A real estate investor who'd been Chairman of the county Republican Party and a public officer of the Sarasota-Manatee Airport Authority, Bob Waechter in 2012 was "the most powerful political player in Sarasota County politics," according to the Herald-Tribune.

His stature makes it all the more remarkable that he was arrested and charged with the criminal use of a stolen identity for allegedly buying a prepaid debit card to make a campaign donation in the name of a fellow Republican (Arrest Report), in order to make it appear that the Republican, who was running for public office, had contributed to the campaign fund of a Democrat. In brief, Waechter tried to use the identity of a fellow Republican office seeker to discredit her. He later pleaded to a misdemeanor charge. The whole tawdry tale is here.

It might seem that Mr. Waechter's proposal concerns an obscure board that citizens rarely attend to. But look at the larger picture. The County is run by a Republican-dominated County Commission that has blessed Whole Foods' desire to pave a healthy wetland, given the go-ahead to Carlos Beruff's wish to build 200 homes at a landfill, and approved many more mini-gated communities, even as it lowered impact fees that cover costs of roads and other infrastructure, and presided over the gutting of the 2050 Plan that sought to moderate the Browardization of open land east of I-75.

Browardize: to turn a section of paradise into an undesirable place to live because of poor planning and excessive development, leading to overcrowded roads and other municipal ills.

The Sarasota construction/real estate/developer sector is led by politically ambitious fellows like Beruff, who recently declared for Marco Rubio's Senate seat, and Pat Neal, who says he might like Rick Scott to appoint him as the Chief Financial officer of the state of Florida. Mike Moran, the attorney who helped get Beruff's plan for his landfill development approved, is running for County Commission. 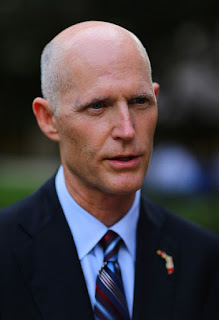 Meanwhile, Florida Gov. Rick Scott, who's doing everything in his power to privatize the state, continues to eviscerate regulatory authority while making sure minimum wage employers everywhere know they're welcome in Florida.

Figure in the carpet

So, when Bob Waechter asks the Sarasota Charter Review Board to transform itself into an inert, appointed body, he's but a small figure in a big carpet. The less government and citizen input, the more anarchic room developers, builders, realtors, lenders, and their political marionettes have to roam.

The next meeting of the Charter Review Board is 6 pm, Wednesday, May 11 at the County Administration Building, 1660 Ringling Blvd. in Sarasota. The public is welcome and those who wish can have five minutes to speak. Nothing would be more splendid than a room full of Sarasotans opposing Bob Waechter's proposal to de-democratize the Charter Review Board. Come. Wear white.