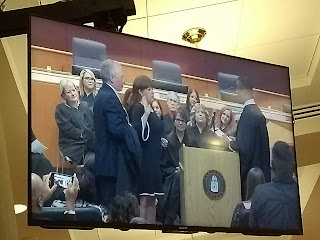 Venice attorney Maria Ruhl was sworn in Friday, Jan. 4, as the newest judge of the 12th Judicial District, which includes Sarasota, Manatee and DeSoto counties.

Ruhl won her seat fair and square in the last election. Over the last few years, some judges have been appointed via a committee run by developer Pat Neal, himself an appointee of Rick Scott.

Born in Venezuela, Ruhl came to the US with her mother and 6 sisters when she was 3 years old. She is the District's first Hispanic judge.

Surrounded by the judges of the district, Chief Circuit Judge Charles E. Williams administered the oath of office to Ruhl, whose husband stood beside her. 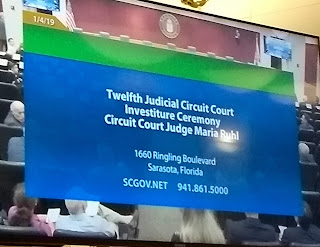 In a district where judges often avoid having to run for election, Ruhl's victory could encourage more attorneys to challenge sitting judges, according to sources contacted by the Herald Tribune.