Bringing an umbrella to a hurricane: Update

On Friday May 25, 2018, the Board of Sarasota County Commissioners will hold a fiscal workshop in the "Think Tank" on the third floor of the County Administration building. The workshop is open to the public, begins at 9 a.m., and will examine all facets of the Sarasota County budget, including a recent inventory of all public lands. The Board will consider selling public lands as one strategy to offset budget shortfalls.*


A detailed article from the Sarasota News Leader: Plans call for about 200 surplus Sarasota County parcels to be turned over to one or more brokers in July for sale as soon as possible

The Board identified more than 200 parcels of public land that could be sold immediately. Observer


The Board's review comes in the wake of prior Board decisions to take key revenue options off the table.


That decision was predicated on the understanding that the Board had a better solution: A public service tax of up to 8% on electricity, natural gas, liquid petroleum and water.

On September 21, 2017, the Board voted against instituting a public service tax.


That decision was predicated on the understanding that the Board would use $5.4 million from its Economic Uncertainty Fund to balance the budget. The Board agreed it could later find ways to pare expenses, making cuts in services if necessary.

Despite improving tourist taxes and other added revenue from new construction, and despite $5.4 million in recurring budget cuts, the County is not off the hook.

Two new state revenue referenda on the November ballot virtually guarantee that the County will be looking at large budget shortfalls in the near future. The Sarasota News Leader states:


If those pass — the result commissioners have indicated they expect — then the board would be looking at finding money to eliminate a shortfall of $8,970,406 in its FY20 budget and an even larger hole — about $10.3 million — in the FY21 budget.

One referendum increases the homestead exemption from $50,000 to $75,000, which is estimated will cost Broward County $32 million in annual revenue. The other referendum makes permanent a cap on increases on non-homestead property assessments. Both involve amending the state Constitution, so both are on the ballot.


Despite the ad valorem increase and the cuts made to parks, libraries, other public services, Friday's workshop focus is on selling public lands. This is like opening an umbrella before a hurricane.

The county needs a realistic strategy, given the extraordinary shortfalls looming: 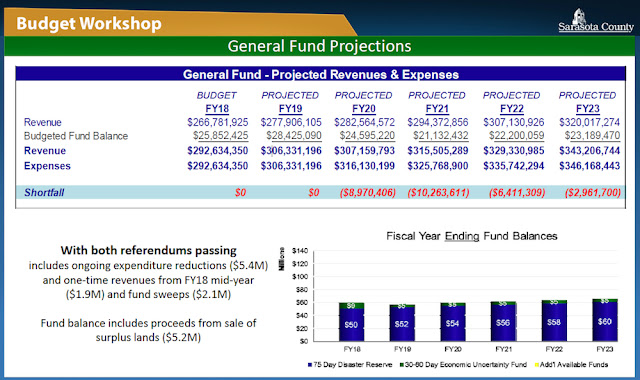 The Board is facing a new fiscal reality, yet it appears not to have begun to address it. It is looking to sell public lands -- a one-time, market-sensitive, relatively small-revenue option -- rather than examining systemic, recurring revenue options such as millage or impact fee increases, or through a public service fee.

At a public talk he gave recently, former Commissioner Jon Thaxton said that the sale of public lands is not the first thing a Board does -- indeed it should be the last. The bar in the public interest should be "extraordinarily high" before public land should be sold, he added.

Now might be a good time for our officials to close their cocktail umbrellas and take an honest look at current growth patterns and what's coming down the road. With the state's egregious electoral giveaway, local governments are looking at serious budget pain. Examine realistic provisions now and bite the bullet.


*Note: Friday's workshop is a review of all public lands with an eye toward selling those which staff identifies as neither necessary nor significant for possible future use. So far, the public lands known as "the Quads" near the Celery Fields are not part of this review. They are on hold as a citizens group (The Fresh Start Initiative) works with the County on constructive, community-friendly proposals for at least two of those parcels.

The Think Tank Workshop should be available for viewing online.

All accessible links to the Sarasota News Leader courtesy of the publisher.
Posted by Sarasota Vision 2050 at 4:12 PM