FPL will build a new power line onto its grid by 2020 in East Sarasota. From 28 possible routes it began looking at, it's down to three. One goes right through the Quad parcels at Apex and Palmer Roads. 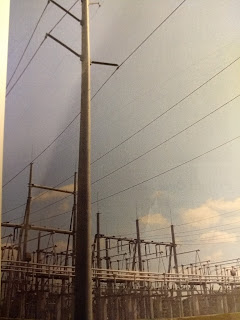 Information about the proposed 138kV lines was on display Tuesday evening at the Conference Center behind the Girl Scouts building on Catttlemen Rd. near Proctor Rd., Attendance was very low during the hour or more that I was there. It seems FPL contacted folks within 500' of the three proposed routes.

Each of the three possible routes connects the Howard substation at Proctor by I-75 with the Bobwhite station on East Fruitville Rd.

The reason for the new line is to bolster the East Sarasota County grid -- with developers from "the three ranches" -- Lakewood Ranch, Hi Hat Ranch and LT Ranch on East Clark Rd. -- planning tens of thousands more homes, FPL sees good reason to get ready for it now, its representatives noted.

The three routes basically run along one of the three major West-East routes east of I-75:

Asked why of 28 possible routes these were the three t"finalists," FPL reps spoke of costs, feasibility, easements etc.

The few who attended the event were invited to fill out small polling cards prioritizing what was most important to them. It would seem possible for FPL, an electric company, to poll and inform more widely and efficiently through electronic means.

Rae Dowling, area manager for FPL, said she'll be happy to field questions and hear from residents. Her email is Rae.Dowling@FPL.com, and office phone: 941 316-6266.