Bo Medred, due diligence, and the dump at our doorstep

There are two sides to the Celery Fields Stormwater Management Facility:

First, it is an engineering success - an award-winning system to manage floodwaters that in 1992 proved more powerful than 100 homes on Phillippi Creek.

Second, it is a work of environmental genius. Somehow when those wetlands were restored, and the muck rose into our mound, nature took off. The transformation was magical: the birds came. Who knew Mount Celery and 220 species of birds, in open air, with a vista that rivals anything in Florida, would command such mad devotion?

The County enhanced what nature began - Audubon and Parks created a green cover, with trees and trails, to which people flocked in droves.

One might ask why anyone would wish to compromise all of this. But there were those three pesky parcels of public lands at the intersection of Apex and Palmer, sitting ignored since 1997. 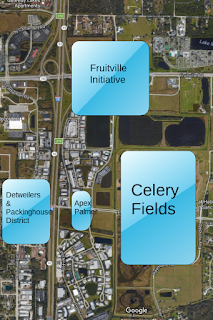 A service station with a convenience store at that corner might be intrusive, but at least would serve residents of the 2000 homes now on East Palmer, whose gated communities have no nearby places to run for milk or coffee.

These communities also have no simple access to Fruitville Rd., other than to drive west on Palmer and make a right at Apex.

Someone looking at the developing area should have seen what was coming. When the County put the public parcels out to bid in 2015, someone needed to say, "Putting intense uses on these public lands at Apex will create issues for Palmer Blvd. traffic, and potentially have impacts upon our pristine Celery Fields.”

When Bo Medred brought in James Gabbert’s proposal for a 16-acre demolition waste processing plant, the record does not reflect that anyone at any level of Sarasota administration -- from Planning, Zoning, Parks, Land Development, Tourist Development, Visit Sarasota, the EDC -- said a word.

But one man certainly saw this coming -- the same man who is trying to bring us the dump: Bo Medred.


At the Planning Commission hearing on June 1, 2017, late in the evening, Mr. Medred said this:

They -- that MEC, [edit's note: Major Employment Center] those industrial uses existed far in advance and the planning for the MEC existed far in advance of those residential developments, and so that was -- if they use Palmer Boulevard, that is their access that traverse through the middle of the MEC. (6.01.17 Planning Commission Transcript p. 286)

In short, Medred, a professional planner, told Sarasota residents who bought homes in gated communities which he had helped develop that they should have observed due diligence, and then they'd have known that industry -- heavy industry -- even a giant loud concrete-pulverizing dump -- was coming down the road.

This is outrageous. the Gabbert-Medred proposal to locate a giant industrial waste processing facility on public land at Apex and Palmer ought to have been vocally critiqued with strong objective analysis by every relevant land and economic steward, adviser, planner and Sarasota public official paid to practice good stewardship and due diligence for the people of Sarasota County.

Instead, when "Bo and Jim" brought the dump idea to the County, you could have heard a pin drop in Okeechobee. Yet when people who bought into Medred's planned development objected to being trapped into a damaged real estate market on Palmer Boulevard, Medred blamed them for failing, you know, that diligence thing.