Core Development and Naples-based Apogee Realty Advisors LLC are seeking to develop the last open space on Sarasota Bay, according to the Business Observer. 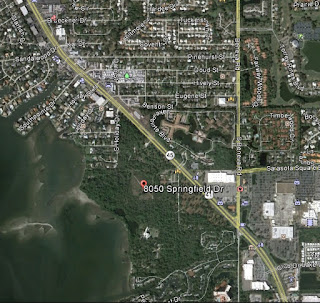 The proposed site is on South Tamiami Trail, north of Vamo Rd., abutting the Presbyterian Church and the County's Bayonne Preserve; it runs to the west borders of Little Sarasota Bay.

I chaired the Pelican Cove Government and Neighborhood Liaison Committee that was charged with exploring this development that is only 1/2 mile from our property. Our board ultimately wrote a letter to the county expressing concerns about traffic, but did not take a position on the actual development. Now I and others who had been on the committee are acting as individuals, not official representatives.

This is the last undeveloped piece of land on the Bay and the Bayonne Preserve has an active eagles' nest. The preserve is also the site of Indian Mounds.

Tamiami Trail is an evacuation route, and you are probably aware of the proposed large Benderson development just about two miles north at Tamiami and Stickney Point Rd. Together, these two developments would exacerbate the already congested traffic situation, especially during the winter months.

The Cassia Cay development comprises two adjoining parcels--18.27 acres is zoned Commercial General and they are proposing mixed used development, but they are asking for certain waivers and exceptions--one to increase the minimum height of at least one of the buildings and another to allow only apartments, instead of mixed use in another building. The second parcel of 13 acres is along the Bay and is zoned high density residential with 98 units, for a total a total of 158 residential units. More details can be found in this pdf.

Update: The County Planning Commission hearing that was scheduled for Aug. 18 has been canceled. As of now, we have no information when the hearing will be held. We will inform you and strongly encourage all residents who are concerned about traffic, the danger of congestion of a hurricane evacuation route and the loss of natural habitat on Little Sarasota Bay should plan to attend. Numbers matter!