Sprawl is like pornography, you can easily recognize it when you see it, as one can from an aerial or by driving through it. For the most part it should be called suburban sprawl.

Admittedly there are lots of poor definitions, and debate over the exact meaning but it is pretty universal in conveying what it is. For example, it is not unplanned, haphazardly developed or unattractive to most people. In the case of Sarasota not only is it planned it is mandated. 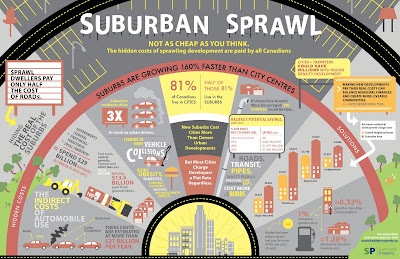 The problem is not that it is unplanned but that the geography is not comprehensively planned; it is mostly a plan for developers and their interests. For example, in Sarasota County there is no comprehensive agriculture or natural resource plan for land uses or systems. All lands that are not publicly owned have some type of development designated including all the rural area.

"Sprawl" conveys that suburban and urban land use designations cover all the land -- even the agriculture and natural resource based lands. It basically renders the agriculture and natural resource base uses unaffordable, since the high price of development rights makes them financially unfeasible, and encourages strong pressure to develop the land.
.
The natural resources and ecological infrastructure are not planned holistically. They are done piecemeal with the hope that everything will fit together. In effect, the developers are given all the responsibility for planning natural resources and agriculture within their developments, which is impossible because there is not even a blue print for them to fit into and and much of the development is grandfathered in, so there is no requirement for natural systems to ever be developed as a system. We instead end up with natural resources being covered, fragmented and unmanaged thanks to development, except to prevent environmental risks such as flooding. We even do that poorly.

I like the term "sprawl" because it illustrates the spreading out of very low density, single use and ineffective development patterns and systems, highly car dependent, requiring highly ineffective transportation and public facility systems. It also conveys the lack of planning for an area's natural resources and agriculture.

There is much more interesting discussion on sprawl in Wikipedia.https://en.wikipedia.org/wiki/Urban_sprawl