A proposed change in procedure for Sarasota's Charter Review Board

A follow-up to the most recent Charter Review Board meeting, at which Bob Waechter submitted an amendment to the Sarasota County Charter, and the Board agreed to review it at its next meeting. Neither Waechter nor the Board disclosed the content of the amendment, but a person in attendance requested a copy and read aloud from it. It proposed to change the Board from an elected panel to an appointed Board. 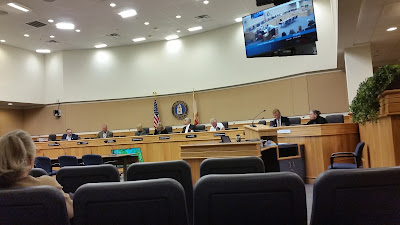 Following the meeting, one person who'd been in attendance sent an email to each member of the Board. A copy is below:

To the Charter Review Board:

I attended your Jan. 20th, 2016 meeting. Much of the discussion involved efforts on your part to be more meticulous about procedure. While this is laudable, I was surprised to learn that you do not routinely make the texts of proposed amendments docketed for review easily available to the public.

Not publishing proposed amendments as soon as you receive them fails to provide open participation to the public in this process. These are, after all, amendments that could eventually impact great numbers of people. While you appear conscientious about allotting time for the pubic to speak at meetings, it would be consistent for you to adopt a rule or bylaw to the effect that proposed amendments need to be published promptly upon submission to the Board.

This can be easily accomplished if you would require all amendments to be submitted via digital format -- in a pdf or text file that then could be posted to your page on the county's site. Virtually no resources or storage space would be required for this purpose.

With this procedure in place, amendment proposals could be shared with the general public via the Internet on many sites, virtually immediately upon submission. One result would be more informed meetings, as those attending will have had time to read and consider new proposals.

Another benefit: You would avoid even the appearance of impropriety as was raised at the Jan. 20th meeting in which several members of the public objected to Mr. Waechter's proposal being submitted and set for review without having shared its title or intent with those present in the meeting chamber. I understand this was not the first time Mr. Waechter had appeared with his amendment, but for myself and other first-timers, there was a sense of inappropriate secretiveness.

If you do not have staffing for this purpose, I'm sure we can find a public-minded citizen who can create a dedicated site whose sole purpose would be to publish amendments submitted to the board at no charge in a timely manner.

Thank you for considering these thoughts.

I do not know why we haven't published proposed amendments previously however I think it is a good idea. I do believe we need to address this as well as some other procedural "rules" or by-law amendments.

Ms Barcomb is the only member of the Board to respond to date. She will be stepping down from the Chair to be succeeded by Richard Dorfman. Other members of the Board include: Anthony Sawyer; Pat Wayman; John Fellin; Steven Fields; Joe Justice; Jim Gabbert, and Bruce Dillon