A citizens' map for Alachua

This posting on Facebook tells of a county plan and an alternative proposed by the citizens of Alachua County, FL. 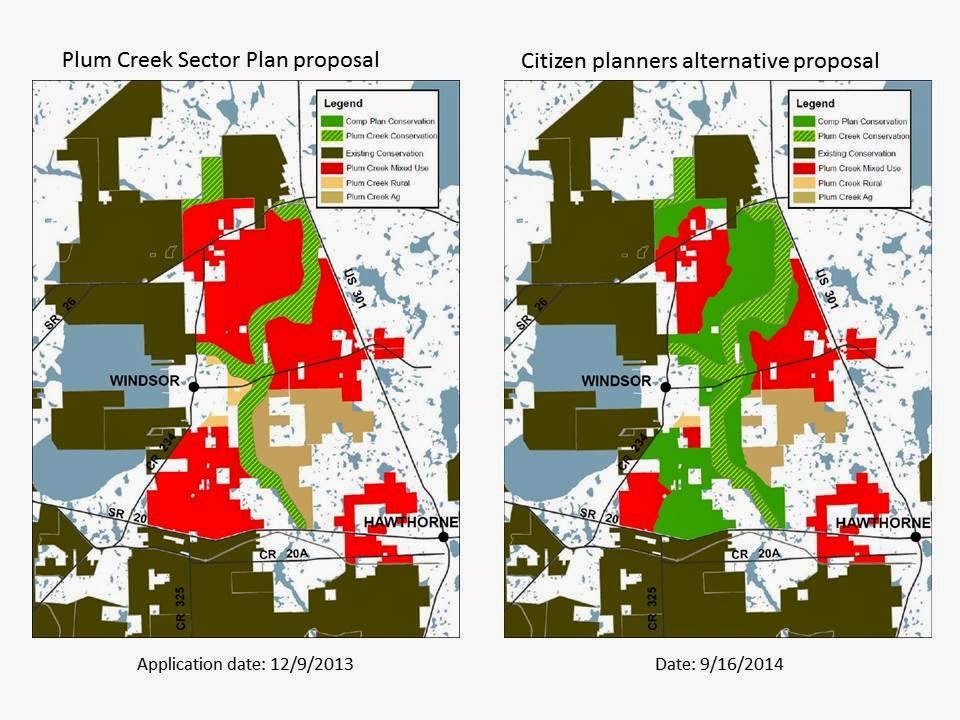 Tale of Two Maps. The map to the left shows Plum Creek's proposed development and conservation areas contrasted with the map to the right which was prepared by a group of citizens and was presented by Jason Teisinger, Jack Putz, David Moritz,Dave Wilson, and Claudia Romero. The primary difference is the width of the buffer around Lochloosa Creek, and the connectivity provided to the North-South wildlife corridor. The acreage devoted to mixed use development is reduced from 11,396 acres to 6,522 acres, and the impact on wetlands is also halved. The proponents claim that their alternative meets the basic standards of the County's Comprehensive Plan with respect to acreages of development in strategic ecosystems, and other issues.

Since most people including me have a hard time relating to large acreages, I started measuring stuff, and here's what will fit onto 6500 acres: Downtown Gainesville from Waldo Road to 13th Street and N. 16th to S.16th Avenues PLUS all of the University of Florida campus to 34th Street including the Shands and VA hospitals PLUS all of Gainesville Regional Airport PLUS the entire North Florida Medical Center complex and the Oaks Mall PLUS Butler Plaza PLUS the proposed mega- developments of Springhills, Santa Fe Villages, Celebration Pointe, and Newberry Village, PLUS Haile Village and Tioga . . . and I'm pretty sure there's still land leftover for a proper croquet court.